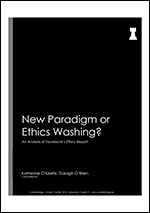 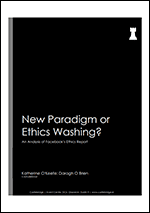 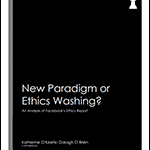 n June 2016, Facebook published their “New Paradigm” for data, ethics, and privacy. This paper by Katherine O’Keefe (@okeefekat on twitter) and Daragh O Brien (@daraghobrien) applies the Castlebridge Ethical Enterprise Information Model (E2IM) to the outputs of that Facebook report and compares the “Statement of Ethic” in Facebook’s New Paradigm with the “Action of Ethic” that is evidenced by a number of the more recent initiatives and actions of Facebook. This paper examines, amongst other things, the alignment of Facebook’s “Life Stages” application with the stated principles of the New Paradigm, and looks at the ethical and legal implications raised by Facebook’s changing advertising model and the about face that was announced in August with regard to Facebook’s relationship to Whatsapp and its data. In the short time since this paper was drafted, a number of consumer rights groups in Europe, the US, and India have announced action against Facebook on that latter change and various privacy regulators have written to Facebook in relation to it, not least the Irish Data Protection Commissioner.